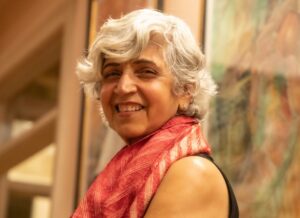 Growing up in the metropolitan city of Kolkata, India, I knew then as a child, that becoming an artist felt right. At home, art was appreciated but never encouraged and I picked up degrees in Education and English.
A move to America in 1988 opened new avenues and a Masters in Painting became a reality.
Many years into my art, now,  I recognize and realize that my inspirations still stem from my Indian heritage, from my adopted city of  New Orleans, my extensive travels, life experiences and Nature.
An awareness for Eco-art then, whose present imperative dangers and vulnerabilities, do rule my mind.
I find myself revisiting fauna and foliage that begin with simple realistic drawings en-plein air and  watch it’s growth in color and abstraction on canvas and paper in the studio.
The energy of the shape of colors and expressive brush strokes aid me thru these  paintings. The abstract often merges with the representational. I admit that I anguish over them, always searching for balance when applying the tenets of design.
My art also extends on scratchboard substrates geared to adults and children, and  while the modernity of black and white lines etched in is appealing, I often find its surface filling up instead in color and gold leaf.  There is joy in creating a series of works.
My goal is for my art to find galleries, group shows and good homes showcasing my work. Making a visual connection with the viewer is important too.
There is presently an urgency to understand and explain in an art form the beauty of our existing nature, it’s resilience and its vulnerability, which are threatened if we do not care.
I do invite you into my world.

Born in Calcutta, India, in 1950, Kitty Parakh has always felt a special connection with the fine arts.  Her maternal grandfather was a sculptor in his own right and she grew up demonstrating an aptitude for artistic expression.

Despite this, family took precedence, and she took to art again after she moved to the United States in 1988. She received her M.A. in Fine Arts from Marshall University, Huntington, WV. Her advisor, Stanley Sporny is a well known landscapist and professor.

During her stay in Charleston, WV, she exhibited in several group and juried shows in the states of West Virginia and Kentucky including the Sunrise Museum at Charleston, WV, the Oglebay Institute’s Stifel Fine Arts Center at Wheeling WV and the West Virginia Division of Culture and History at Charleston. In 1998, she had a solo exhibition in the Sunrise Museum’s Annex, Charleston, WV. In 2001, she moved to New Orleans and has since participated in many group showings with the New Orleans Arts Association, the New Orleans West Bank Art Guild and the BECA Gallery. Her work was represented by the Agora Gallery and Galerie Royale, New Orleans. Currently she focuses on direct sales from her studio and works on commissions.

Professional Membership (Past and Present)